Today is the start of a new Lecher antenna adventure. I left Sligo yesterday to take the ferry in the Southeast of Ireland to France where I arrived around midday.

The main reason to do energy research of the Megaliths in France is because of its many large standing stones but also because I would like to compare the energy patterns I found at the Irish Megalithic sites to those of other countries to see whether the builders used the same knowledge and built them for the same purposes.

First stop today was at the Champ Dolent Menhir near Dol de Bretagne in Brittany. It is a single standing stone which is 9.30 meters high which makes it one of the major monoliths over the Armorican massif and the largest in Brittany that is still standing. Erected on a high plateau, the Champ Dolent Menhir has been standing here since the beginning of the Neolithic.

This standing stone, weighing about 120 tons, was dug from a granite quarry 4 kilometers away. It was never re-erected like some other standing stones in the region. A researcher’s dream as the menhir is still as it was millennia ago. I saw two holes in the menhir which looked like they were recently put there and I was wondering whether they were put there for a reason like the cup marks at the Holy Well in Sligo for drawing in beneficial energies. I met two local ladies and asked them about the holes. One of the ladies who was living in the region for a very long time told me that the previous owner of the land on which the menhir stands, had set up a charity for his children and put a moneybox on the menhir for people to put in donations. It apparently didn’t raise much. The new owner saw no need for this moneybox and took it away which left the two holes in the menhir. 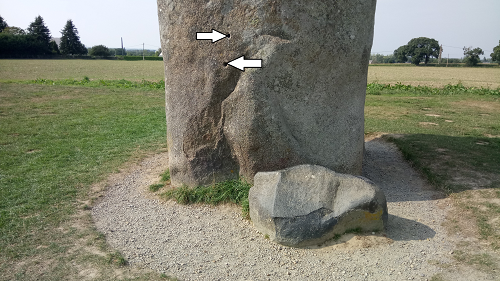 I would prefer people to leave the megaliths be. They were erected and meticulously put there for a purpose and any tampering might influence this.

Believe it or not, but when I was talking to those charming French ladies, I saw a buzzard high up in the sky. It then flew closer by and over the menhir. Apparently a rare appearance in this region according to the ladies. An omen? A sign? I seem to be getting a few of those since I left yesterday. I took a closer look at the type of stone in the menhir and I could make out tiny glittering particles, very likely mica. I might mention that it was very difficult to get a good compass bearing as the North kept shifting. There must be some magnetic component in the menhir causing this. Energy readings reveal that one water current runs towards and under the standing stone which can be measured with the setting of 7.80 on the Lecher antenna which is negative energy. This water current, however, doesn’t continue as a negative signal but is transformed into beneficial energies and which leaves the menhir as positive energy.

The tachyon energy is drawn to the menhir but I will call it transformation throughout this book to enable easy reading..... find out more in the book "Signpost to the Holy Grail? Infinite Energy with Infinite Possibilities! Dowsed with the Lecher Antenna in Carnac and Brittany France" by Copyright 2020Dame Anne-Marie Delmotte